Today starts a month of artistic challenges called “Inktober” where artists all over the world make art via inks as a primary material.  My son Henry and I are both lovers of this month and we usually make an effort to produce at least one finished work each day during Inktober.  We are huge fans of sharpies and Windsor Newton inks.

Henry will be concentrating mostly on cars and robots whilst I will concentrate on anything I fancy at the time, today I quite fancy getting into the Halloween mood already with a cauldron and some candies!

Therefore we shall be posting daily on both this blog and DeviantArt.com

Here is the first picture of the month!

Panic Attack from Robot Wars by Henry is the first to be shown below; he is a huge fan of that show, practically obsessed with it.

Here is my candy cauldron, I know it is a little bit early for Halloween but it was something I wanted to do right now – Henry isn’t letting me live it down, says I should have waited until Halloween before I did it, but I do tend to do a lot of horror or dark themes when I do art anyway, if not that then fantasy and cartoon stuff. 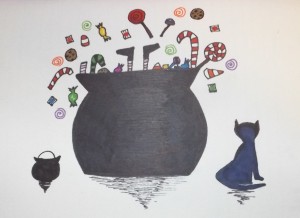 Candy Cauldron by me!

The Kappa – Yokai of Japan

Today’s Inktober is based on a Japanese demon known as The Kappa part of the Yokai demons, he lives in embodiments of water, rivers, lakes and ponds.

Kappas are renowned for their obsession and passion for cucumbers and therefore locals often give offerings of cucumbers at festivals to the kappa’s to keep them from becoming harmful to the villagers.

Kappas have a naturally forming dip at the top of their heads which constantly hold water, if the water was to be accidentally spilled out, the kappa can become extremely weak or die.  It is said, if you are by an embodiment of water and you see a large aquatic humanoid which represents a human, frog and tortoise mixed together, sometimes they may seem like half duck and turtle that is a kappa and that if you do not have a cucumber to hand, this creature will either rape you anally and steal a part of your soul or tear your limbs apart as their second favourite form of food; So what do you do to ensure you are safe from this creature if you can’t give it an offering – you bow, these creatures are awfully polite and will bow back at you, spilling the water from their heads and rendering them helpless until they can top the water back up in its head giving you enough time to scarper!  Despite how evil all of this sounds, it is also thought that Kappas aren’t always malevolent, in fact often times they can be benevolent and help people who go fishing, particularly if they have been appeased with a cucumber or two.

In old Tokyo many people believed that if you ate cucumbers before going fishing you could prevent an attack, but then this act was banned by law because it was seen to be provoking the kappas to attack all the more!

BEFORE AND AFTER PICS. 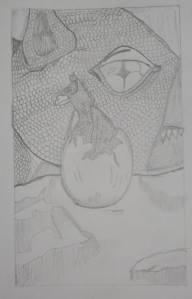 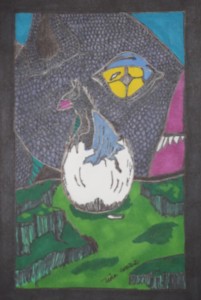 Inktober day 7 – Leprechaun and his pot of gold

Leprechaun with his pot of gold!

I was quite surprised at how I got the skin tone just right, I didn’t want her to look pale and pasty or green, I wanted her to look like the blood is actually flowing in her and that she is more of a success than the monster, because it would be Dr Frankenstein’s second attempt at replicating human life and as we all know – you get better with practise!

As a fan of horror I just had to do this scream queen, she’s a beauty and tomorrow I might plan to do her beast, “The Monster” himself.

Rose for the first day of Inktober!

A rose for the first day of Inktober.

Here is my first ever attempt at working with traditional Winsor & Newton inks and it is for the first day of Inktober, which is today!
It’s a lovely rose in a frame, ink colours include, gold (yes finally bought some) mixed with apple green, there is scarlet mixed with white to make pink. I have been told by my husband and a friend that this should be considered for a Valentine’s Day card, never really thought about doing that, but I can see where they get the idea from! 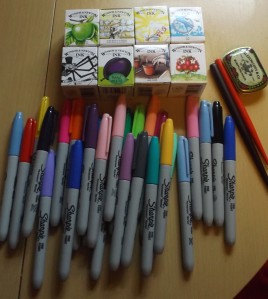 Tomorrow is the start of Inktober and Wednesday is my 36th birthday, yesterday Paul (my husband) and I went out to select my birthday presents and I chose to concentrate on stocking up my art supplies.  I chose to take on two new Medias this month, inks and oil paints.

As you can see in the photographs I have eight different colours from the Winsor and Newton range, traditional black Indian ink, apple green, silver-metallic aluminium, purple, blue, scarlet, sunshine yellow and peat brown; I wanted gold but they were sold out, so I have to buy them another time.  I didn’t realise until I had got home that these inks are mixable, which meant that I would have needed the white I saw there, to mix with the scarlet to make a sort of pink colour.  I learned this by watching some YouTube videos which showed me how to use the ink for various effects in art.

I am very new to inks in this format, usually I draw with inks from felt tip pens and biros, but I wanted to do something a little more traditional – so I bought a dip pen for drawing and mapping to help me, I was tempted to pick up the big black feather quill I saw there too, but I forgot to put it in the bag at the end of my shopping trip, I was limited to a budget of £75, so I wanted to see if I had more money for it at the end of the trip, I did, but I forgot it.

I also bought a pack of 28 limited edition sharpies that are fine permanent markers, another thing I have never used before.  Now all of this didn’t cost me £75, there were other things I bought too – but I took a photograph of the things I specifically bought for the start of Inktober, which is something I am trying to do very seriously this year.  I have also bought a pink mixed media sketch book with forty pages, specifically for this event.

For those who are not in the know, Inktober is an annual event which lasts for thirty one days throughout the whole of October, where artists are urged to use inks in their art in at least one picture per day and to record these pictures on social media – the idea was bought about by a guy called Jake Parker, it’s a sort of NaNoWriMo for artists.

I am hoping that my best friend in the art world, Erin Cooper is going to do Inktober as seriously as she normally does this year as before now, I have never took on the challenge as seriously as I aim to for this year – it would be fun seeing what each other can do this month.

So, the challenge starts on October the 1st, all you need to do is draw with inks daily, until Halloween and you’ve officially passed Inktober, miss a day and you can go to the imaginary Wall Of Shame!  Well that’s what I will do to myself, if I miss a day, lol.

A Food Forest in your Garden

forest gardening in Scotland and beyond

A safe place to talk openly about mental health & illness

I LEAVE YOUR ROAD TO WALK ON MY GRASS.

The other side to the known

Write what you feel, coz it doesn't make you fear. A doctor by profession and writer by passion✌️